"White Rabbit", title track of this 1972 release on CTI records 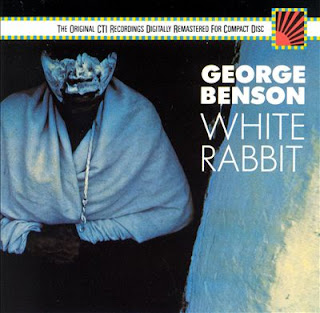 There are a couple generations that only know George Benson for his vocals. He is still, arguably, the greatest bebop guitarist alive. This was the CD that catapulted his popularity and showcased massive guitar skills. The CTI label was hot, and George was one of it's brightest stars. His cover of the Jefferson Airplane hit "White Rabbit" showcased the strength of the CTI lineup, while taking the song into another galaxy. The star studded cast included Ron Carter on bass, Billy Cobham on drums, Hubert Laws on flute, Airto on percussion, and Herbie Hancock on piano. Orchestral arrangements by Don Sebesky.
Posted by James Adams at 10:28 PM