Craig Taborn has been on the scene for enough years to be called a veteran of the music. He has played with and/or recorded across a wide landscape of jazz, electronica, and free jazz. The list of bands and projects he's been involved with is impressive, to say the least. 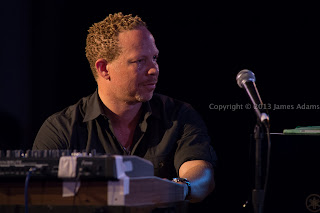 Charnett Moffett has had a connection to the elite artists in jazz for a very long time. His father, Charles, was a drummer for Ornette Coleman in the 1960s, so he's more than accustomed to being around the legends of jazz. 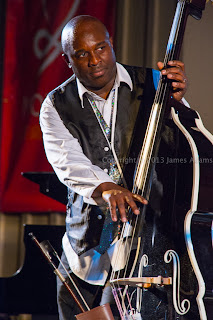 This year, Saturday evening's performances on the Garden Stage featured the artists of the Motéma Records label. Moffett's fourth CD on Motéma , Spirit of Sound, was released on July 9th. Together with label founder Jana Herzen, Moffett hosted a showcase of Motéma artists, and anchored many of the ensembles on bass.

This Nat Adderley composition has been covered a number of times over the years. One of the most notable was Quincy Jones version that appears on "Gula Matari". That version is frequently erroneously credited to Toots Thielemans who supplies the vocal scat. This is the originally release version that has all the funk that can be associated with the Cannonball Adderley Quintet.

This incarnation of the quintet is the most recognized with Nat and Cannonball joined by Walter Booker on bass, Roy McCurdy on drums, and Joe Zawinul on keyboards. The set was recorded in front of a live audience, which was Cannon's preferred method at the time. You can hear the members of Operation Breadbasket partying in the background as Zawinul cuts loose on electric piano. Nat's vocal antics as usual were the high point, and something live audiences always looked forward to. Go back in time with this hidden gem and relive the party side of jazz performances.
#jazz

Faces of Jazz: Saturday Afternoon on the Grounds at the Monterey Jazz Festival

You don't have to have a ticket for the shows in the Arena to have a great time at the Monterey Jazz Festival. Of course you have the many artisan vendors and the great food booths. There are also seven other performance venues. Six of them feature live performances from a large variety of artists. The seventh, the Jazz Theater, shows simulcasts from the main Arena performances. 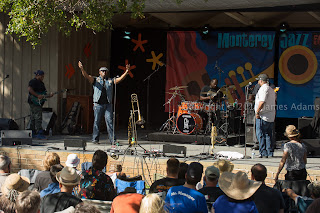 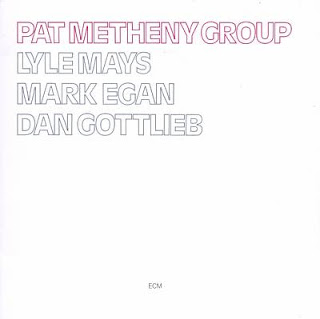 This track quietly catapulted Pat Metheny from a relative unknown to a profound presence on the jazz scene. Forget about "rising star"; he pretty much bypassed that whole period. At the time of a lot of emerging rock-flavored jazz releases, Metheny's new band split right between straight-ahead and fusion. This was a completely new and distinctive sound.

First of all, it's a seven minute track. It starts out gently, quickly comes to a simmer, and before you know it, they're cooking at a rapid boil pace. I remember first hearing it in a Berkeley, CA record (yes, record) store. It crept up on me and a dozen other people in the store at the time. It was as though we collectively had to know just who this was they were playing, at about 4 minutes into the track. The whole stream of us, without a word, walked over to the turntable, saw what was playing, then immediately went to the rack and grabbed a copy.

Almost everyone that has heard Pat Metheny and his music has latched on and continued to follow him. "Phase Dance" was the track that started that magnetic attraction.
#jazz

The Relatives were formed in 1970 by veteran Dallas gospel singer Rev. Gean West and his brother Tommie. Their sound bridges the gap between traditional gospel, soul, and psychedelia. They've always been known for their powerful original songs and searing stage show, and released three singles to limited success. They also recorded a session that was never released. 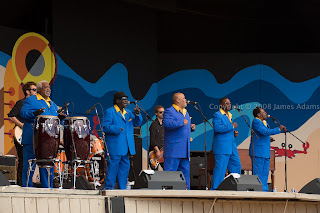 The group disbanded in 1980, but that was not to be the end. In 2009 an anthology comprised of the three singles and the previously unreleased session was released under the title "Don’t Let Me Fall". The release of the anthology brought The Relatives back together as a band, planting the seeds for their 2013 Yep Roc release, The Electric Word, which was recorded and produced by Jim Eno of Spoon.

Even serious Jazz fans find themselves forgetting about big bands. That is, until they hear a good one. The is much more than that; this is a great big band. In 1985, drummer Jeff Hamilton joined bassist John Clayton and saxophonist Jeff Clayton to form the Clayton-Hamilton Jazz Orchestra. It's comprised of a group of Los Angeles based veteran musicians who bring a big, big sound. Make no mistake, these guys swing; hard. 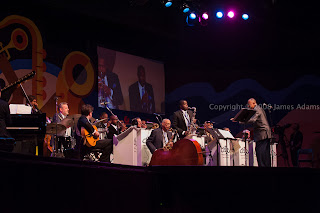 The orchestra performed a special suite of music, commissioned by the Monterey Jazz Festival. In keeping with the festival theme, the commission piece was titled "Sweet Suite: The Brubeck Files". 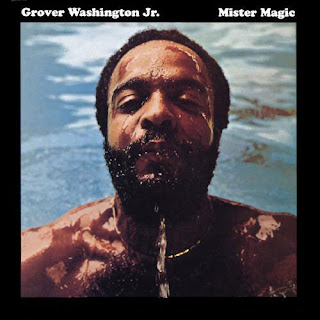 The title track of this 1974 release, Grover Washington Jr.'s fourth on Kudu records, is easily the most memorable of his career. The vast majority of the tracks on Washington's releases to date had been covers of popular songs and movie themes. They all had the distinctive style, edge, and funk that differentiated Kudu Records from Creed Taylor's prime label CTI records. The arrangements weren't as tight, controlled, and elegant on Kudu, making them very radio friendly to the stations that were bridging the gap between straight R&B and the more hard core jazz stations. The latter were fighting the ideological wars between straight ahead jazz and fusion.

"Earth Tones" opened the album in a direction almost no one was expecting. This Bob James composition and arrangement introduced the jazz world to a completely different side of Washington. Compared to his previous work, Washington wasn't simply coloring outside the lines, he was coloring the cover and the spine of the book. This complex piece with swelling harmonics and shifting time changes was adventurous in the direction of the many cursed "fusion" tracks of the day, but stayed well within the pocket and compelled you to just listen to see where is was going. Brilliant solo work by Washington, James, and a number of up and coming legends. The star studded personnel lineup for this release included Eric Gale on guitar, Randy Brecker on trumpet, Harvey Mason, Sr. on drums, and John Faddis on flugelhorn. Time to break out this Grover classic and listen to some of those "other" tracks on this masterpiece.

Each year, the Monterey Jazz Festival's Artist-in-Residence is featured in a number of ensembles. One of those is typically a group of all-stars from the Berklee College of Music. The 2013 Artist-in-Residence, Joe Lovano, helped open Friday night on the Garden Stage with a group from Berklee dubbed the Global Jazz Ambassadors. 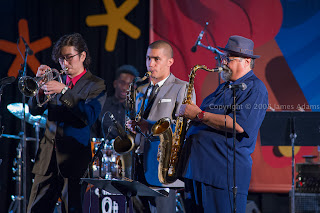 The Berklee Global Jazz Institute (BGJI) is a performance program designed to foster creativity and musicianship through various musical disciplines, with pianist and composer Danilo Pérez as its artistic director. The BGJI provides a comprehensive contemporary music environment where students are given opportunities to explore their creativity to the highest level possible, advance the power of music as a tool for the betterment of society, and connect musical creative thinking with the natural environment. 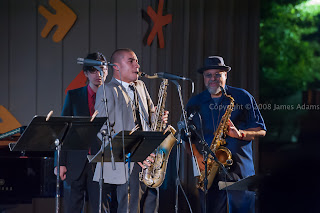