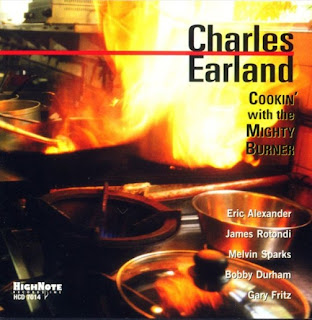 In any discussion on the great masters of the B3 organ, Charles Earland is not necessarily a name that will be readily offered up. It should be. Earland was as adventurous and innovative as they come. Owing his major organ influences to Jimmy Smith and Jimmy McGriff, Earland actually toured with McGriff for three years. At that time, he was a young tenor sax player. The sound of Smith and McGriff definitely left their mark, as Earland switched to the B3 in 1966.


This was an outstanding outing for Earland, and one of the last ones he recorded before his death in 1999. Earland and his longtime  sidemen (guitarist Melvin Sparks and drummer Bobby Durham), are joined by trumpeter Jim Rotundi and saxophonist Eric Alexander, as well as percussionist Gary Fritz. Earland features the younger horses in the band for the most part, but when he steps to the front, the heat turns up in short order.

"Seven of Nine" is an all out jam, and B3 organ at it's finest. Eight minutes of swingin' funk, letting everybody get a piece of the action. Come along for the ride.