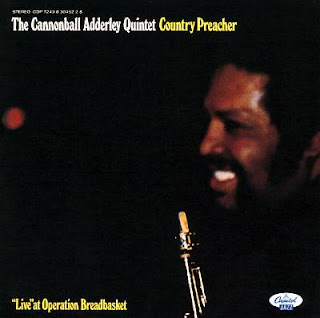 This Nat Adderley composition has been covered a number of times over the years. One of the most notable was Quincy Jones version that appears on "Gula Matari". That version is frequently erroneously credited to Toots Thielemans who supplies the vocal scat. This is the originally release version that has all the funk that can be associated with the Cannonball Adderley Quintet.

This incarnation of the quintet is the most recognized with Nat and Cannonball joined by Walter Booker on bass, Roy McCurdy on drums, and Joe Zawinul on keyboards. The set was recorded in front of a live audience, which was Cannon's preferred method at the time. You can hear the members of Operation Breadbasket partying in the background as Zawinul cuts loose on electric piano. Nat's vocal antics as usual were the high point, and something live audiences always looked forward to. Go back in time with this hidden gem and relive the party side of jazz performances.
#jazz
Posted by James Adams at 10:23 PM