The comment I get most often about the Playboy Jazz Festival comes in late May or early June. Most often it comes from friends that hear us talking about it and our plans to go. On hearing about those plans, we always hear "I wish I heard about it sooner". What they don't realize is, we start our planning for this festival in January, which is when the tickets go on sale. The date of this year's festival is June 11-12. Tickets went on sale to the public on January 25th. So far the list of artists scheduled to appear (subject to change) includes: Buddy Guy, Dianne Reeves, Fourplay, Naturally 7, Eddie Palmieri, and Lee Konitz. That's just the beginning, but more on that later. 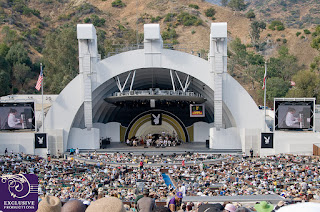 This is one of those "must go to" festivals. It's so deep with us, we hold all plans for the mid June weekends until we find out exactly when the festival will be held. Then we plan everything else around that. That's considerable given that we're also photographers and we're talking about the height of the wedding season.

What's so special about this festival? That's a fair question if you haven't been. To start with, it's at the Hollywood Bowl. We're talking early summer, perfect weather (normally), and two days of outdoor concerts. Make no mistake, this is a huge, two-day party. There are relatively few restrictions on what you can bring in terms of food and drink. Over the years we've seen some seriously elaborate spreads, complete with fine wines and champagne.

So now you have the setup: great location, good weather, lot's of people ready to have fun, great food (even if you didn't bring your own), and great music. I mentioned only a small portion of the lineup. What makes the Playboy unique is the format. It runs from 2:30-11:00PM on Saturday, and 2:00-10:30PM on Sunday. There are an average of 11 artists or bands each day. No, that is not a misprint, and yes, there is only one stage.

The trick is, that stage is split in half. While one artist's band is playing on the front half, the next artist is being set up on the back half.When the first artist completes their set, they spin the stage. The next artist, who is already set up and sound checked, begins playing as the stage is turning. There are no breaks or intermissions the whole day. Now, that's a lot of music. The complete lineup will be announced on February 10th. We travel with one of my best friends and his wife. To be honest, we pay little attention to the lineup. We KNOW we're going, regardless. We've gotten as far as having arrived at the Burbank airport, before one of us asks, "do you know who's going to be there this year?"

Now, just because the tickets went on sale now, and the festival isn't until June, doesn't mean you have a lot of time to waste thinking about this. Tickets are assigned on a first come, first serve basis. By waiting too late, you could wind up with seats near the top of the bowl. Given that this is one of those "places to be if you're anybody at all", the upper bowl seats tend to be filled with more party people than music people. Let's just say that those seated around you may be much less into the music than you are.

Act fast. For more information, see the Playboy Jazz Festival Fan Page on Facebook. Tickets for both days range from $40 to $100. Considering the number of artists presented, that's one of the better bargains around. To purchase tickets, contact the Hollywood Bowl Box Office at 323.850.2000 (10-6 daily) for an order form. You'll also want to contact the Playboy Jazz Festival to get on the mailing list for advance ticket notice and ordering.